Like many of my friends, I spent much of today completely distracted by the news and live video feeds covering the first finisher in the 2018 Golden Globe Race. After 212 nearly days at sea, Jean-Luc Van Den Heede sailed across the finish, up the channel leading to Port Olona Marina and into the history books, taking 100 days off of Robin Knox-Johnston’s reference time set in 1969. Even more remarkable is that he sailed the final 8,000 miles (out of 28,175) with a damaged rig, after his boat was pitchpoled in the Pacific, an amazing achievement, and a great validation of his decision to alter the boats rig to be shorter and stouter before the race. During the press conference that took place as soon as VDH stepped ashore, I was especially amused to see him looking much more awake and lively than either Sir Robin or Don McIntyre, the race organiser.

I’m sure I will face some criticism for not allowing VDH and the rest of the soon-to-be GGR finishers any time to rest on their laurels, but I am pretty confident that the type of person that goes in for these sorts of challenges is the least likely to want to do so. For us, a life without a big ambitious project is no life at all. Don McIntyre is of course keen to sign people up for another GGR in 2022, but I would suggest there’s another interesting record to be claimed in the meantime: who will be the first person to finish both the Golden Globe and the OSTAR? I was surprised to discover that RKJ does not already hold this distinction.

Don’t get me wrong, Sir Robin is a rightful legend with countless achievements, but finishing the OSTAR is not (yet?) one of them. He started the OSTAR in 1988 on Suhaili, but retired to Plymouth after she started making water. Also among the retirees in the 1988 OSTAR was fellow Golden Globe Competitor Chay Blyth, who decided shortly into the race that he was not sufficiently recovered from a recent injury for it to be prudent to continue.

Italian sailor Alex Carozzo actually started the original GGR already a member of the Half Crown Club, having started but retired from the 1968 OSTAR due to rudder problems.

The only person who has both finished an OSTAR and taken part in (but not finished) a Golden Globe Race is the Norwegian Are Wiig who finished 4th in the under 30 foot class of the 1988 OSTAR. I think it should come as no surprise that Wiig, despite not finishing the 2018 GGR, gave one of the most impressive demonstrations of seamanship in the race when he sailed himself over 300 miles to safety in Cape Town under jury rig after having been dismasted in the South Atlantic. 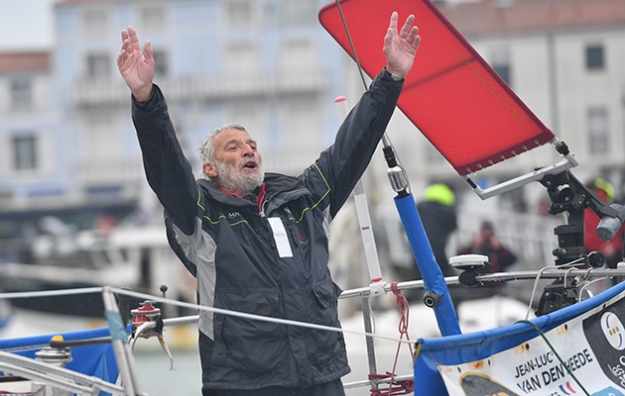 By the time the next OSTAR sets off on 10 May 2020 there will be up to five new finishers of the GGR. Wouldn’t it be great to see at least a couple of them on the start line in Plymouth, going for this elusive GGR/OSTAR record? Given the nail biting finish of this GGR, I would pay good money to see VDH and Mark Slats in a rematch, especially under more, er, conventional racing rules.

1 thought on “Today the world, next year Newport?”